I DENY I ACCEPT
Wunderkammer
2018

dances, jumps and waves of the three times

Orchestra, from the Greek orkhḗstra, "space for the evolutions of the choir".

The ORCÆSTRA is a living organism that swallows music and then composes it again, lighter, so as to blow it ever further.

Saturday 7th July 2018 started ORCÆSTRA, Vinicio Capossela's new summer tour; the singer-songwriter would be accompanied by Filarmonica Arturo Toscanini, alternated with Orchestra del Teatro Massimo di Palermo. Both orchestras were directed by Stefano Nanni, who is also the author of the arrangments and a close collaborator of Capossela. The tour has been made possible by International Music and Arts.

Vinicio Capossela's music, with its variety and armonic complexity, always suited unusual ensembles and music sheets written by amazing composers. Along with the orchestra, his music gets wider, becoming a labyrinth, words get lost between brass, woods and violins in a fascinating music journey.

Just like huge water animals, ORCÆSTRA swallows music: from Capossela's classics like «Marajà» or «Pryntyl», to the most unusual ones like «Stanco e perduto» and «Nostos», the orchestra elevates them and then spits them out in the form of a song odyssey, Capossela's twenty five years long odyssey.

«It is unusual that the name of the orchestra comes from the physical space that was dedicated to dancing. In Greek theater, comedies, tragedies were sublimated in music.

This concert, with the orchestra, is a fracture in profitable time. What an amazing non-economic act... Playing songs that were born with just an instrument... With fifty musicians! It is the conquest of the useless. The greatest lightness through the toughest effort.»

«When Vinicio first told me about this new artistic project, I immediately understood how he loved the "symphonic dimension" from the passion with which he was talking about it. It is a territory that I personally consider far from his original conception of music and sound, so wonderfully free from conventions. But just as opposites attract, Vinicio's onirical and visionary dimension gets on really well with the strict form that produces the sound of a symphonic orchestra.

Finding a balance in this middle land is anything but easy, but once you enter there it produces surprising results. The wooden piano and Vinicio's vibrant voice sail between waves of sounds and instruments, disappearing and re-emerging like Aivazonvsky's "ninth wave". I think that some of his most famous songs will get into another dimension thanks to a different tonal highlight, but leaving their poetry unaffected.»

These were the tour dates with Toscanini Filarmonica:

The concert at Gardone Riviera went sold out. This is how Capossela announced it. Video by Jacopo Leone. With Peppe Leone.

In February 2018 Vinicio Capossela played two shows in South America, thanks to the booking agency Musicalista:

During these performances, he played a tribute to his all time heroes, who are traditional singers like Goyeneche, Troilo, Mercedes Sosa and Victor Jara, songs that he previously performed during his 1999 tour «Parole d'altrove», but without releasing them.

Capossela's relationship and admiration for South American music and culture started a long time ago, when he used to go to Florida club in Modena, founded by Chilean people on exile because of Pinochet's dictatorship. Through these people he discovered literature, music, poetry, political engagement and even love. Songs such as «La regina del Florida», «Ultimo amore», «Camminante», «Che coss’è l’amor», «E allora mambo» were inspired by that period.

However, Capossela never actually visited Chile nor Argentina before the 2018 shows.

Some images and comments of the audience. 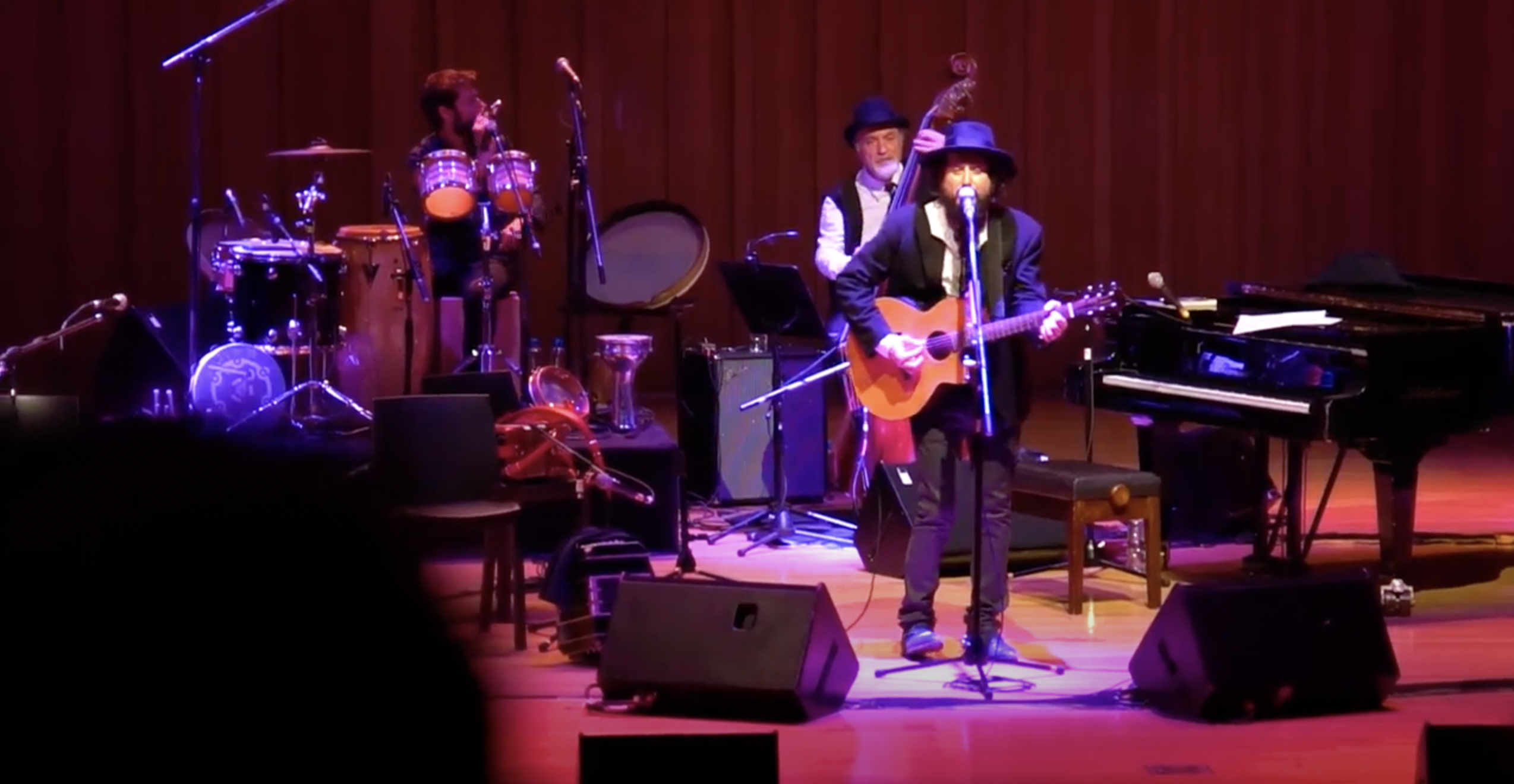 Still in 2018, after the South American tour, Vinicio Capossela performed in Indonesia for the following dates: