I DENY I ACCEPT
Wunderkammer
2013

After the debut at Auditorium Parco della Musica in Rome, at Patti Smith's "My Festival", and after the performance at May Day's concert in Rome, on 25th June 2013 «Primo Ballo» was released. It is the surprising cd of Banda Della Posta, released by La Cùpa and distributed by Artist First.

Polkas, mazurkas, quadriglie, paso doble and fox trot, a vortex of dance music to lift your mood up and make your head twist. This album is Capossela's first work as a producer, with the collaboration of Alessandro Asso Stefana and Taketo Gohara.

Marriage has been the body and the bread of the community, its roots. It was celebrated with food and music. This music, played along the ritual, was humble, to dance to. A repertoire of mazurkas, polkas, waltz, paso doble, tango, tarantella, quadriglia and fox trot was usual in Italy during 1950s and 1960s and it became classic in a period in which weddings were the main occasion for music, encounter and dance. In Calitri, in High Irpinia, a few years ago, a group of elder musicians of that golden age, not free of misery, got used to gather in front of the post office during the sunny afternoon. They sat there, so as to control the arrival of their pension. When they got the cheque, they took their instruments our of their cases and played something together.

Their repertoire makes us remember simple and lasting things, played in an impassive and solemn way, from the height of the hundreds of weddings they played at. That is why they got the name of Banda della Posta.

The album has been recorded in this hall where, through the years, many weddings took place. 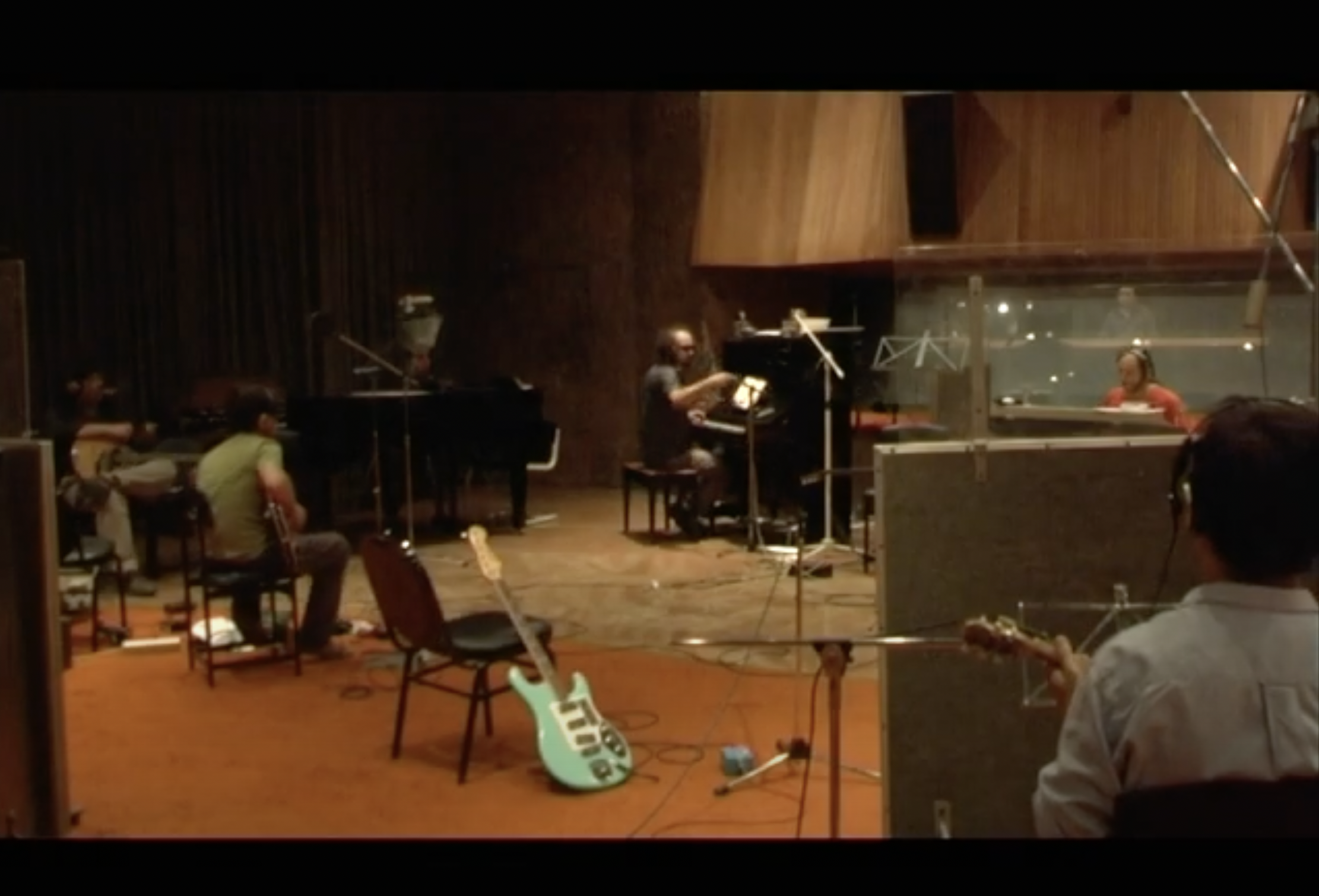 After the release of «Primo ballo», Vinicio Capossela and Banda della Posta performed a long series of show between 2013 and 2014, all produced by Ponderosa.

2013 is the year of Sponz Fest's first edition, that was held between 28th and 30th August in Calitri (AV); Vinicio Capossela is its art director. The theme of the debut edition was the world of weddings, as we said, not only limited to one of Calitri’s community ground rituals and a link to Banda della Posta’s album: the festival hosted art performances like «The exposition of the bed sheet» by Mariangela Capossela as well.

The first edition of Sponz Fest witnessed, on its last day, the creation of the classic Capossela concert; in 2013 he played with Banda della Posta. You can watch the video of the full concert below.

The concert was held in Piazza Repubblica in Calitri (AV).

After the experience of «Rebetiko Gymnastas», Capossela’s pen gave birth to a book, published in 2013 by Il Saggitore: its name is «Tefteri. Il libro dei conti in sospeso».

A tavern that you cannot see from the street, a small door marking the entrance. Inside, a few tables, low lights, smoke. At the back of the hall a small stage, where you play in line, in front of people. Voice, guitar, bouzouki. Tonight we play rebetiko. You listen to it while you eat and drink. There is no way out.

Vinicio Capossela walked the streets of Greece during the year of the financial crack. He met what is left of the legendary rebetes in Athens, Tessaloniki and Crete's taverns, catching visions, thrills, magic and illusions on a small notebook, his "tefteri".

Capossela tells an unprecedented Greece, suffering and proud, that rediscovers rebetiko as "crisis music". A music of absence, born from the rage and nostalgia of a people, the Greek-Turkish one, that in 1922 ended up rootless and foreign in its own homeland.

Rebetiko is a political choice, rebetiko is belonging. It is the song of a siren that echoes in the harbors of Mare nostrum (the Mediterranean Sea).

You do not clap at rebetiko, you break plates: the root of its energy comes from its anarchism. Note after note, page after page, «Tefteri» is the transcription of debts and credits that are necessary to «learn how to live». It is the register of unfinished business that everybody has towards life and death. Because, since ancient times, what comes from Greece is part of the universal, it tells us about Man and his fate, right there where he was born. When he went over the necessity and he invented game and art. When he lifted his head up and became Anthropos.

In May 2021 «Tefteri» was re-pressed and published by Il Saggiatore. It features a preface by Yanis Varoufakis and an afterword by David Prudhomme, who already realized «Rebetiko Gymnastas»' cover. Apart from the Italians editions, the book has been translated in Greek and Spanish, and published in Greece and Spain between 2013 and 2014.

«The waves come and then go, at the cost of turning the whole world. A word exists because it vanishes when it gets out of your teeth, but it comes back too, otherwise it would stand still as a stone.

That is why I kept this small notebook, as a debt to the people I met, so as the words I have listened to could come back too.»

I called it "tefteri" as a man in a bar in Athens suggested me, between the crowd, while we were about to listen to ammanes, the lamentation that sets the demon free, that sings about the life you have not lived yet. «What are you writing in that small notebook? What is that, your tefteri?»

Behind a wall near where I lived, last year I read «Greece is only the beginning». This sign was referring to economical crisis. But it has been like this for ages. Greece tells us about man since ever. Greece has given man a name, anthropos, which means «the one who looks up», so as to mark the difference with other creatures that, to live, must look down. So, talking about Greece is talking about man.

Crisis is a Greek word too, it comes from the verb krino: separate, choose. In this tefteri I marked many unifinished business that humanity has towards itself and the world we live in. To talk about it I chose a kind of music that accompanies crisis, a kind of music that was born from separation, that in 1920s gave a voice to the anarchist and unconventional side of its listeners. A kind of music that does not keep apart from life truth and pain, that expresses a mood and a way to take life. A kind of music that imposes a choice: choose what you are made of. A kind of behaviour compass, although, as a songs says, the real rebetes are all dead. It is true, they are dead, but the question is still alive: what do we choose to be made of?

That is the unfinished business, the overdraft, that repeats in this tefteri, written by an author who tried not to hinder the voices that he heard. Now that I think about it, even bios is a Greek word. It means life. Everybody's life taps into the great, primigenic basin of life.

«Tefteri» was presented during a series of appoinments in Italy and not only. In fact, the book has been published also in Spain and Greece as it has been translated in Spanish and Greek.

These were the dates:

On 3rd December 2013 the film «Indebito» went on screen in Italian cinemas. «Indebito» is a documentary written by Vinicio Capossela and Andrea Segre, who also directed it; it is produced by Jole Film and La Cùpa in collaboration with Rai Cinema.

Today's crisis is identitary, before being economical. It is separation, disorientation. European cultures have been sold out to homologation coming from consumption and the race towards wealth.

Our documentary reflects some time spent while listening to the absence of ourselves, living without a perspective.

In order to do it, we wandered as flâneurs in the country that is the symbol of the crisis: Greece and its debts.
This way, Greece becomes Europe, its crisis is our crisis and rebetiko becomes the living chant of a desperate hope.

We shot the whole film with three hand cameras, creating unstable frames trying to be still.

Night concerts, words becoming music and music listening to words. And cities in daytime. Urban poetry, the signs of rage on the walls, broken windows. The decadence of crisis.

This film is built as a docufilm, but it presents also a theatrical mise-en-scène.

I use to write down the things I see, so as to save them in my memory in a visive way too, that needs imagination to be full too. Imagination is the best metteur en scène. Rebetiko has been in my heart for a long time, not only for for its beauty and strenght, but for the interior, subversive charge that it lights up. It keeps all the unconventional parts of ourselves alive, the pride, the adversion to compromise. It stands against truth without fear. It does not turn you into a brave person, but it deletes the fear of pain so as to become friend with it, as Saint Francis said about "sister death".

During this year (2013), we started talking a lot about Greece, in terms of debt and crisis, an information and image really partial, that has been used as a bugbear in which people's fears are rising. It is like being told "Keep calm, you are going to lose all the money you collected, yours and your parents'", a kind of message that Greek citizens are being told constantly.

The sentence "We are not Greece" should be replaced by the more Kennedian "we are all Greek", because in Greece the social, political and economical mechanism that is being experimented in every other country. For once, Greece seems to be one step ahead on a path that is common to all.

So I wanted to know something more about it from a nearer perspective. I went for a few trips with a recorder and a notebook, my tefteri. On it I wrote down the debts that I personally have towards rebetiko and the country where it was born. Those debts are always human teachings, the credits are what you are trying to give back. To return my credit I tried, in my possibilities, to arouse curiosity and let this music, rebetiko, be more known.

The economical debt is related to central banks, but music is about people and what they taught me. So, in order not to let these people and their voices remain in my tefteri only, we decided to turn them into a film. I asked Andrea Segre to give a shape to these stories, to give a face to people and music. It turned out a reflection about identity, during the crisis of consumption, that is exemplary. In some way, it is about every one of us. I tried to slip into these stories, trying to find some frequency of ancient times, of mangas, of ghosts between the contemporary noise, accompanied by the small instrument that rebetes used to hide in prison, baglamas. It has been possible with the help of Luca Bigazzi, Andrea, of the long microphone and the company with witch we wandered between the taverns of Athens, Tessaloniki, Crete and Ikaria.